Since we are not able to be together as a church family, I thought I would take this opportunity to provide you with a biblical chronology, a daily walk through Passion week. You will gain the most by reading the Scripture and commentary for each day. Many blessings!

​Have you considered walking with Jesus through the last week of His life? The Gospels accurately record for us the events and conversations that took place during Jesus' last days as He moved toward the cross and to the resurrection. I would ask you to walk with me this week through the day-by-day events of Jesus’ final days as He concluded His ministry on earth. On the Sunday before His death, Jesus began His trip to Jerusalem, knowing that soon He would lay down His life for our sins. Nearing the village of Bethphage, He sent two of his disciples ahead, telling them to look for a donkey and its unbroken colt. The disciples were instructed to untie the animals and bring them to Him.

Then Jesus sat on the young donkey and slowly, humbly, made His triumphal entry into Jerusalem, fulfilling the ancient prophecy in Zechariah 9:9.

"Rejoice greatly, O Daughter of Zion! Shout, Daughter of Jerusalem! See, your king comes to you, righteous and having salvation, gentle and riding on a donkey, on a colt, the foal of a donkey."

The crowds welcomed Him by waving palm branches in the air and shouting, "Hosanna to the Son of David! Blessed is He who comes in the name of the Lord! Hosanna in the highest!"

On that Sunday, Jesus and His disciples spent the night in Bethany, a town about two miles east of Jerusalem. This is where Lazarus, whom Jesus had raised from the dead, and his two sisters, Mary and Martha, lived. They were close friends of Jesus, and probably hosted Him and His disciples during their final days in Jerusalem. The following morning, Jesus returned with His disciples to Jerusalem. Along the way, He cursed a fig tree because it had failed to bear fruit. Some scholars believe this cursing of the fig tree represented God's judgment on the spiritually dead religious leaders of Israel. Others believe the symbolism extended to all believers, demonstrating that genuine faith is more than just outward religiosity; true, living faith must bear spiritual fruit in a person's life.

When Jesus arrived at the Temple, He found the courts full of corrupt money changers. He began overturning their tables and clearing the Temple, saying, "The Scriptures declare, 'My Temple will be a house of prayer,' but you have turned it into a den of thieves"
(Luke 19:46). On Monday evening Jesus stayed in Bethany again, probably in the home of his friends, Mary, Martha, and Lazarus. 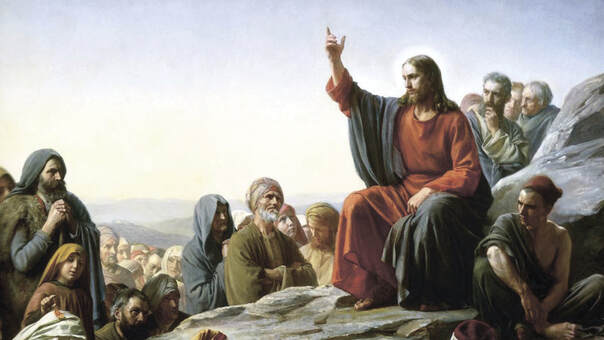 ​Day 3: Tuesday - On Tuesday Jesus Goes to the Mount of Olives

On Tuesday morning Jesus and His disciples returned to Jerusalem. They passed the withered fig tree on their way, and Jesus spoke to His companions about the importance of faith. Back at the Temple, religious leaders were upset with Jesus for establishing Himself as a spiritual authority. They organized an ambush with the intent to place Him under arrest. But Jesus evaded their traps and pronounced harsh judgment on them, saying:

"Blind guides! ... For you are like whitewashed tombs—beautiful on the outside but filled on the inside with dead people's bones and all sorts of impurity. Outwardly you look like righteous people, but inwardly your hearts are filled with hypocrisy and lawlessness...Snakes! Sons of vipers! How will you escape the judgment of hell?" (Matthew 23:24-33)

Later that afternoon Jesus left the city and went with His disciples to the Mount of Olives, which sits due east of the Temple and overlooks Jerusalem. Here Jesus gave the Olivet Discourse, an elaborate prophecy about the destruction of Jerusalem and the end of the age. He speaks, as usual, in parables, using symbolic language about the end time events, including His Second Coming and the final judgment.

Scripture indicates that this Tuesday was also the day Judas Iscariot negotiated with the Sanhedrin, the rabbinical court of ancient Israel, to betray Jesus (Matthew 26:14-16). After a tiring day of confrontation and warnings about the future. Jesus and the disciples once again, returned to Bethany to stay the night. The Bible doesn't say what the Lord did on the Wednesday of Passion Week. Scholars speculate that after two exhausting days in Jerusalem, Jesus and His disciples spent this day resting in Bethany in anticipation of Passover.
​
Just a short time previously, Jesus had revealed to the disciples and the world, that He had power over death by raising Lazarus from the grave. After seeing this incredible miracle, many people in Bethany believed that Jesus was the Son of God and put their faith in Him. Also, in Bethany just a few nights earlier, Lazarus' sister Mary had lovingly anointed the feet of Jesus with expensive perfume. ​Day 5: Thursday - Passover and the Last Supper on Maundy Thursday

From Bethany, Jesus sent Peter and John ahead to the Upper Room in Jerusalem to make the preparations for the Passover Feast. That evening after sunset, Jesus washed the feet of His disciples as they prepared to share in the Passover. By performing this humble act of service, Jesus demonstrated by example how believers should serve and love one another. Then, Jesus shared the feast of Passover with his disciples, saying:

"I have been very eager to eat this Passover meal with you before my suffering begins. For I tell you now that I won't eat this meal again until its meaning is fulfilled in the Kingdom of God." (Luke 22:15-16, NLT)

As the Lamb of God, Jesus was about to fulfill the meaning of Passover by giving His body and giving His blood to be shed in sacrifice, freeing us from sin and death. During this Last Supper, Jesus established what we call the Lord's Supper or Communion, instructing His followers to continually remember His sacrifice by sharing in the elements of bread and wine (Luke 22:19-20).

Later, that evening, Jesus and the disciples left the Upper Room and went to the Garden of Gethsemane, where Jesus prayed in agony to God the Father. Luke's Gospel says that "his sweat became like great drops of blood falling down to the ground" (Luke 22:44, ESV).

Late that evening after Jesus was done praying in the Garden of Gethsemane, Jesus was betrayed with a kiss by Judas Iscariot and arrested by the Sanhedrin with the Roman guards. He was taken to the home of Caiaphas, the High Priest, where the whole council had gathered to begin making their case against Jesus. In the early morning hours, as Jesus' trial was getting underway, Peter denied knowing his Master three times before the rooster crowed.

Good Friday is the most difficult day of Passion Week. Christ's journey turned treacherous and acutely painful in these final hours leading to his death.

According to Scripture, Judas Iscariot, the disciple who had betrayed Jesus, was overcome with remorse and hanged himself early Friday morning.

Meanwhile, before the third hour (9 a.m.), Jesus endured the shame of false accusations, condemnation, mockery, beatings, and abandonment. After multiple unlawful trials, He was sentenced to death by crucifixion, one of the most horrible and disgraceful methods of capital punishment known at the time.

Before Christ was led away, soldiers spit on him, tormented and mocked him, and pierced him with a crown of thorns. Then Jesus carried His cross part of the way to Calvary and then a man named Simon was compelled to carry it the rest of the way. At Calvary, Jesus was again mocked and insulted as Roman soldiers nailed Him to the wooden cross.

Jesus spoke seven powerful statements from the cross, including "Father, forgive them, for they do not know what they are doing" (Luke 23:34, NIV), "Father, into your hands I commit my spirit" (Luke 23:46, NIV), and His last words were, “It is finished”(John 19:30).
Then, about the ninth hour (3 p.m.), Jesus breathed his last breath and died.

By 6 p.m. Friday evening, Nicodemus and Joseph of Arimathea took Jesus' body down from the cross and lay it in a tomb. Jesus' body lay in its tomb, where it was guarded by Roman soldiers throughout the day on Saturday, which was the Sabbath. When the Sabbath ended at 6 p.m., Christ's body was ceremonially treated for burial with spices purchased by Nicodemus.

"He brought about seventy-five pounds of perfumed ointment made from myrrh and aloes. Following Jewish burial custom, they wrapped Jesus' body with the spices in long sheets of linen cloth." (﻿John 19:39-40,﻿ NLT)

Nicodemus, like Joseph of Arimathea, was a member of the Sanhedrin, the court that had condemned Jesus Christ to death. For a time, both men had lived as secret followers of Jesus, afraid to make a public profession of faith because of their prominent positions in the Jewish community.

Similarly, both were deeply affected by Christ's death. They boldly came out of hiding, risking their reputations and their lives because they had come to realize that Jesus was, indeed, the long-awaited Messiah. Together they cared for Jesus' body and prepared it for burial. On Resurrection Sunday, or Easter, we reach the culmination of Holy Week. The resurrection of Jesus Christ is the most important event of the Christian faith. The very foundation of all Christian doctrine hinges on the truth of this account.

Early Sunday morning, several women (Mary Magdalene, Joanna, Salome, and Mary the mother of James) went to the tomb and discovered that the large stone covering the entrance had been rolled away. An angel announced:

"Don't be afraid! I know you are looking for Jesus, who was crucified. He isn't here! He is risen from the dead, just as he said would happen." (Matthew 28:5-6, NLT)

On the day of His resurrection, Jesus Christ made at least five appearances. Mark's Gospel says the first person to see Him was Mary Magdalene. Jesus also appeared to Peter, to the two disciples on the road to Emmaus, and later that day to all of the disciples except Thomas, while they were gathered in a house for prayer.

The eyewitness accounts in the Gospels provide undeniable evidence that the resurrection of Jesus Christ did indeed happen. Two millennia after His death, followers of Christ still flock to Jerusalem to see the empty tomb. HE IS RISEN! HE IS RISEN INDEED!
Jesus Christ had paid the penalty for sin by offering the perfect, spotless sacrifice. He conquered death, both spiritually and physically, securing our eternal salvation:

"For you know that God paid a ransom to save you from the empty life you inherited from your ancestors. And the ransom he paid was not mere gold or silver. He paid for you with the precious lifeblood of Christ, the sinless, spotless Lamb of God." (1 Peter 1:18-19, NLT)

This is certainly a week to remember. A week where we can see with eyes of faith what it cost for us to be redeemed by Almighty God.
The hymn I leave you with this week is "Jesus Paid It All, all to Him I owe, sin had left a crimson stain, He washed it white as snow."