Bar Mills Community Church
HISTORY OF MEMORIAL DAY
Memorial Day, as Decoration Day gradually came to be known, originally honored only those lost while fighting in the Civil War. But during World War I the United States found itself embroiled in another major conflict, and the holiday evolved to commemorate American military personnel who died in all wars.
For decades, Memorial Day continued to be observed on May 30, the date Logan had selected for the first Decoration Day. But in 1968 Congress passed the Uniform Monday Holiday Act, which established Memorial Day as the last Monday in May in order to create a three-day weekend for federal employees; the change went into effect in 1971. The same law also declared Memorial Day a federal holiday.
Many Americans observe Memorial Day by visiting cemeteries or memorials, holding family gatherings and participating in parades. Unofficially, it marks the beginning of the summer season. 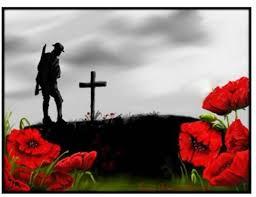 The Significance of Poppies
May 26, 2017
Writingsby Cassandra Crosby
My office is filled with art work depicting poppies. When I first started working here I thought how appropriate it was, remembering as a child when I would go with my grandfather to sell poppies for people to wear on Memorial Day and raise money for the local chapter of the American Legion. Some of the younger people I know, however, didn’t realize the significance of the poppy and what it means for Veterans around the world. Since this event was always so important to me, selling poppies with my grandfather, and I hate to see traditions get lost, I wanted to do a blog on the significance of the poppy to our Veterans.
After World War I, a day of remembrance was set aside by the Commonwealth of Nations member states to memorialize the fallen from all the countries that had fought in what was then known as The Great War. Remembrance Day or Armistice Day is held on November 11, memorializing the end of hostilities, “on the 11th hour of the 11th day of the 11th month.” This is a familiar date to all of us in the United States. While it is still called Remembrance Day in Great Britain, it is now known as Veteran’s Day in the United States.
However, in the United States, we have our own Memorial Day. After the Civil War, women’s and religious organizations started the formal practice of decorating the graves of the fallen soldiers and in 1865; the federal government began creating military cemeteries for the Union dead. This practice evolved into the Memorial Day we celebrate today and was merged with the wearing of poppies in the 1915 after the publication of the poem, In Flander’s Field, by Lt. Colonel John McCrae, , following the second battle of Ypres. A copy of the poem can be found at the end of this blog.
The poppy, in Europe and the United States, quickly became a symbol of the fallen military after the publication of In Flander’s Field. The opening line refers directly to the sight Lt. Col. McCrae witnessed as he, a physician, walked among the crosses laid out to mark the site of so many who died for their counties. While the poppies grew among the graves, they are also a resilient flower. The poppy is able to lay dormant for many years in the soil only to reappear in great numbers, covering fields which had lay bare for many years previously. This also held significance for Lt. Col. McCrae as he wrote of the heroes who appeared in great numbers to come to the aid of others against oppression and tyranny during this Great War, and who would lie dormant until their call was heard again.
In 1918, Moina Michael wrote another poem that was a tribute to Lt. Col. McCrae’s accounting of the death on Flander’s field. Her poem, together with her promotion of using the poppy as the official symbol for the remembrance of the fallen, created what is now an iconic symbol of history that many do not know the story behind. Poppies, due to her enthusiasm became the symbol of the American Legion and funds were, and still are, used to help support the needs of disabled veterans.
My grandfather was a veteran of WWII who fought in North Africa and Italy and lost his leg after being shot the day before VE day. Even as an amputee and after 60+ surgeries, he still took me every Memorial Day to stand on that corner of the local department store with the poppies in my hand to pass out as he collected money for his “band of brothers.” It is a memory that I will cherish and one that my children and their children, because of his service, and the service of all veterans, will hopefully never have to know.

Cassandra Crosby is a Veteran’s Claims Advocate for Hill & Ponton. She has over 20 years of experience in the management of non-profits programs specializing in Mental Health, Substance Abuse, and Victim Services. She is currently focusing on research and reviewing files for evidence that can be beneficial to disability claims. Cassandra is especially versed in helping with mental health issues but she has great knowledge in an array of areas including chemical exposure cases and individual unemployability issues. She is a Florida native and is also a full time student working on a Bachelor’s Degree in Legal Studies.