Bar Mills Community Church
For we walk by Faith  not by Sight
2 Corinthians 5:7

"....Be shepherds of the church of God, which he bought with his own blood." 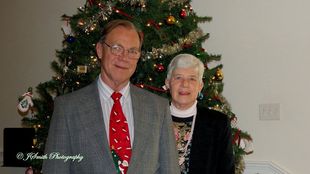 ​Rev. Dr. Malcolm Hall and his wife, Sue, came to us from Ohio, but they both have deep New England roots. Malcolm grew up in Scituate, MA, on the South Shore of Boston, where he developed an interest in sports, music, and fishing. It goes without saying that he is an avid Red Sox fan! He earned a B.A. from Brandeis University, an M. Div. from Andover Newton Theological School, and a Doctorate of  Ministry  from Bangor Theological Seminary. He was ordained as an American Baptist minister on September 25,1977 and has served churches in CT, NH and VT. He has three grown children and seven grandchildren.

Sue’s father, Rev. Carl A. Jones, Jr., was an American Baptist pastor, so she grew up moving around some, although most of the moves were around New England. She earned her B.A. in education from the University of Connecticut and has a M.S. Ed. From Framingham State College in MA. She taught Home Economics at the Middle School level in Haverhill, MA, and is now retired (although she keeps her hand in by substitute teaching; she also offers sewing alterations and repairs). She has two grown sons and two grandchildren.

Malcolm and Sue met seventeen years ago in Newton Junction, NH, when Sue (the head of her church’s pastoral search committee) made a fateful phone call to VT, to inquire about Malcolm’s availability to serve as an interim, having been given his name by the Area Minister. Little did either of them suspect, at that time, where things would lead!

Malcolm’s ministry passions include preaching and teaching, spiritual life development, and just walking with people through the joys and sorrows of life’s journey.